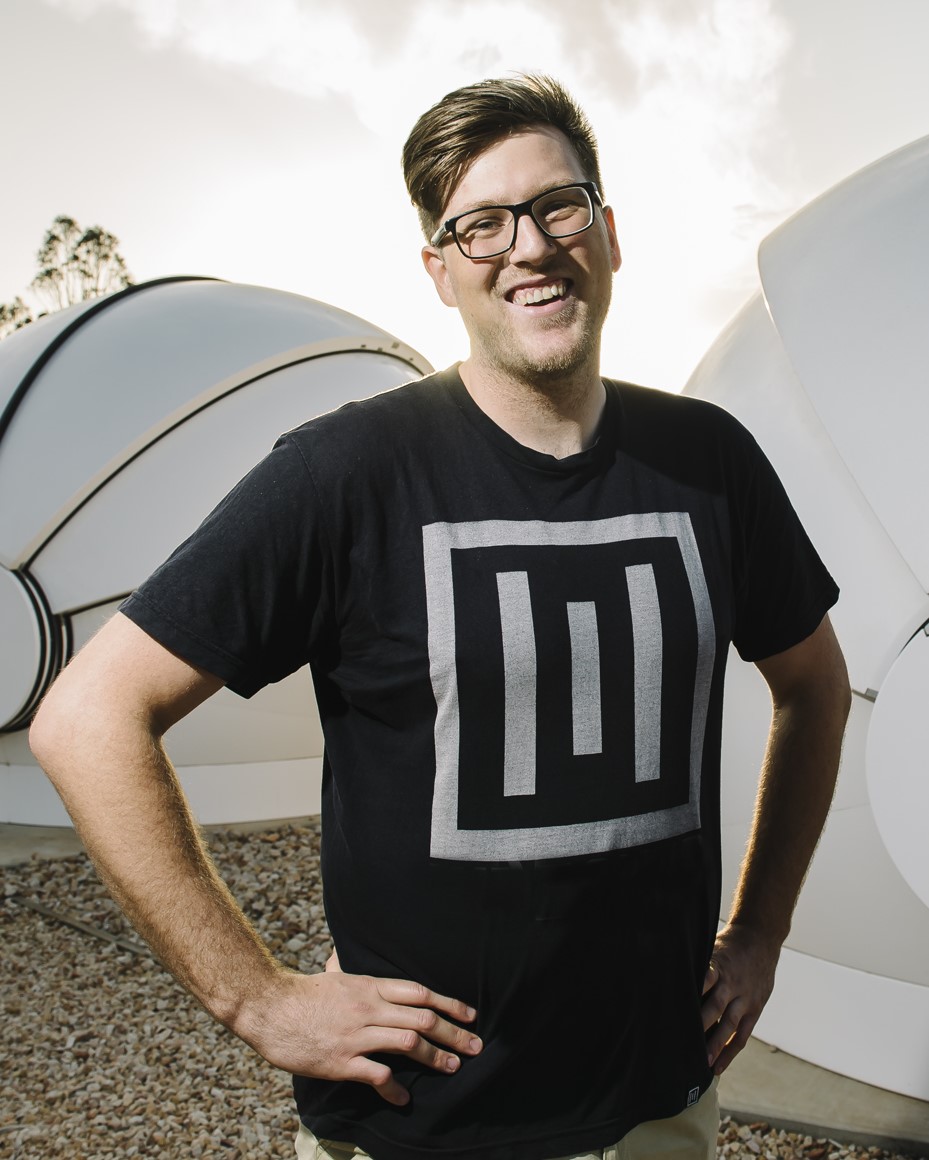 I want to try and answer one of humankind's greatest mysteries; Are we alone? I am currently a PhD Candidate based at the University of Southern Queensland's Toowoomba campus, in sunny Queensland, Australia. My PhD research improves the stellar and planetary characteristics of known and newly discovered planets and the stars that host them. Not only do I want to improve the physical characteristics of these stars and planets, but I also want to know what these planets are actually made out of. Are they made of fairy floss? A whole planet made out of Vegemite? Okay... that's a bit ridiculous, but we can actually detect the amount of rocky material within a host star's atmosphere and then use this as a proxy of the rocky material that these planets could comprise of! From this information, we can make better informed decisions to see if these exoplanets could be terrestrial-like in composition, and thus a better sense of whether life could exist on these alien worlds.

As of December 2019, astronomers have discovered over 4,100 exoplanets beyond our solar system. Unfortunately, with the two main methods we use to detect these fascinating worlds, all we tend to see is indirect evidence of a planet. We either see a periodic dip in the host stars' light or light spectrum shift as the planet's gravitational pull tugs on the star. With these two measurements alone, you can roughly determine the geological and chemical composition of rocky terrestrial worlds known as super-Earths or small gassy worlds known as sub-Neptunes. But, what if we could do better than that? What other information can we pull out of these two measurements alone to help us better understand the fundamental structure of these worlds? Well, the gravitational tug method discussed above, known as the Radial Velocity technique, utilises precise measurements of a star’s spectrum. This spectrum encodes the chemical abundances of the star, showcasing the distribution of different materials within it, particularly the amount of planet-building elements like silicon, iron, magnesium and other elements found within a planet hosting star. We can then assume that the star and planets that it hosts were made from the same ginormous gas cloud, and thus we can then use the stellar abundances to then infer the compositions of super-Earths and sub-Neptune worlds! If you'd like to know more about this, I'd highly recommend checking out the works from Caroline Dorn and Cayman Unterborn


During my PhD, I've been incredibly fortunate assisting in the commissioning of MinERVA-Australis. MinERVA-Australis the Southern Hemisphere's only dedicated observatory assisting in NASA's new planet-finding mission, TESS. TESS is a space-based observatory that's scouring the entire night sky for exoplanets. These planets are then confirmed using ground-based observatories such as MinERVA-Australis based in regional Queensland, Australia. Five 0.7 m telescopes at the facility can either work in unison or independently that can either all point at faint targets or observe multiple bright stars all at the same time! Since the commissioning phase, I've been one of the key observers for the project, snaring the discovery of four exoplanets thus far! On top of all of this, I also use the observatory to obtain high-precision chemical abundances of host stars that help me work out what their planets could potentially be made out of.

The size and mass of an exoplanet hinge entirely on its host star. When astronomers and astrophysicists alike discover a brand-new world, in most cases we've determined the mass and radius of the exoplanet based upon how big and massive its host star is. In some cases, the fundamental properties stars, including their mass and size can be as large as 100%. That means the size of some stars could be twice as big, or tinier than a pin!! This error than translates back to the planet's properties. We need to accurately determine how large and how massive smaller worlds are, if we have any hope of sending back ET's phone bill. My PhD in part redefines the stellar mass, radius, age of thousands of stars, but I've also assisted in analysing and redefining hundreds of exoplanetary systems discovered by TESS's predecessor, the K2-mission. We've used high resolution spectra from the HERMES spectrograph upon the AAT to precisely determine the mass and radii of planet hosting stars down to an error of 5%!

I'm currently a part of several Australian-based exoplanet survey teams including MinERVA-Australis, K2-HERMES, TESS-HERMES and Veloce as well as being a member of the galactic archeology survey GALAH.
Please feel free to read up on any research that I've worked on here.

If you haven't realised by now, I. LOVE. SPACE!! And I love talking about it as much as I do researching it. Currently, I'm the Student Representative for the Astronomical Society of Australia's Education and Public Outreach Chapter and way back in 2016, I received the opportunity of a lifetime, running away and joining the circus... the Questacon Science Circus. The Science Circus is a practical Master's degree in Science Communication Outreach, run jointly by Questacon, the National Science and Technology Centre, and the Australian National University. I travelled all around Australia, presenting engaging STEM shows to primary and high school students. This experience definitely honed my science communication skills, which are invaluable for any modern-day scientist!


Throughout 2019, I was the lead PI for an Advanced Queensland Engaging Science grant, where I travelled across regional South East Queensland, getting junior primary students to dance through the solar system and build their very own alien worlds from dough. In the coming months, I'll have my Build-A-Planet activities up on the astronomy education resource website astroEDU. My main outreach activities currently revolve around the University of Southern Queensland's Astronomy for Schools and Communities program. It's an incursion-based program where we travel around to different schools around regional Queensland, showing off our immaculate dark, regional skies with portable and easily accessible telescopes. In mid-2019, The Conversation ran its first Curious Kids night at USQ, where I got to talk to a room full of budding scientists about bags of poo on the Moon and oceans of liquid "farts" on Uranus... it was LOADS of fun!

Some of my other outreach escapades including presenting my science at numerous events across Australia including Pint of Science, Gold Coast Skeptics Club annual Darwin Day, Science in the Pub Tasmania and up to Outback Queensland for the Queensland Government's Flying Scientists program to name a few.

In my previous life, I founded and coordinated the heavy music radio show MOSH at Radio Adelaide, Australia's oldest community radio station. Combining this experience with my Science Circus training, I've become pretty media savvy, yarning on the radio, TV, print and social media about the latest astronomical research across the globe. Below are some of my media highlights and is by no means an exhaustive list.

I've had the absolute pleasure of writing for The Conversation, a NGO that aims to bridge the gap between researchers and the boarder community. All of their articles are written by academics and researchers, and are published under a Creative Commons license. That means if you are a publisher/blogger etc. reading this and like these stories or others, feel free to republish them at your own discretion!

If any of these tickled your fancy, you can check out the rest of my Conversation articles here.
Yeah look, it's a bit weird being on the other end of the mic. But I enjoy it nevertheless, as you can see me with USQ's self-proclaimed "Media Tart with a Heart" Prof. Jonti Horner below at the ABC's Southern Queensland studio!

And here I was thinking I had a face for radio! Apparently not. I've had the absolute pleasure in being a part of two commercial TV science shows, Scope and Brain Buzz. I've appeared on Scope twice, once was showcasing how we can use 3D scanning and printing technology to print a copy of TV host. The other time was showing off MINERVA-Australis and how we find exoplanets in regional Queensland. In 2018, I managed to snare the lead role for Brain Buzz's live show held at both the Brisbane Town Hall and Toowoomba's flower festival. The Brisbane Town Hall show alone was to 1400 people

I'm a proud South Aussie, hailing from the character building northern suburbs of Adelaide. Growing up in such an environment, I had no role models around me whom had even finished high school, let alone gone off to get a university degree. But, my passion to explore the cosmos broke this social barrier and, well ... started from the bottom now we're here! Oh yeah by the way, my brain is filled with four major topics; astrophysics, music lyrics, sports statistics and obscure Simpsons references.

Music, and in particular "heavy" music, has been my vice ever since early High School. Moshing about in a mosh pit is very cathartic for me personally, but I completely understand that it's not for everyone! I've had the absolute privilege back at Radio Adelaide to interview some of my biggest idols including Slayer, Killswitch Engage, Parkway Drive, A Day To Remember, Protest The Hero and more. If you'd like to know more about the tunes I dig, I've created a Spotify playlist below which will show you how similar, or maybe dissimilar our tastes in music are.